During the Civil War more than 180,000 black soldiers served in segregated Union Army regiments.  Realizing that many of the black units had achieved outstanding combat records, the U.S. Congress reorganized the peacetime army to include black enlisted men in the Ninth and the Tenth United States Cavalry and by 1869 the Twenty-fourth and Twenty-fifth United States Infantry—all under the 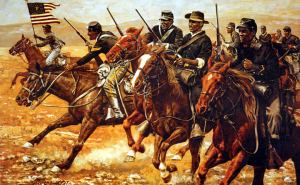 leadership of white officers. As these soldiers moved to posts in Texas and across the Southwest and the Great Plains, several explanations surround the Indians’ calling them “Buffalo Soldiers.”  Most accounts claim they earned Indian respect for their fierce fighting ability.  Others say the title came from a combination of the Indians’ regard for the buffalo and the black soldiers’ tightly curled hair that resembled the hair on the bison’s face. Accepting the respect of their adversaries, the Buffalo Soldiers

Crest of the Buffalo Soldier

adopted the image of the bison on their regiment crest.

The army paid the black recruits $13 a month plus food, clothing, and shelter—more than most black men could earn after the Civil War.  Their enlistment was for five years and when they reached Texas they took part in most of the major Indian campaigns.  They were stationed at almost every fort on the frontier from the Rio Grande to the Panhandle—helping to build and repair the outposts.  They escorted mail teams, stagecoaches, cattle herds, and survey crews.  They built roads, strung miles of telegraph lines, and performed ordinary garrison duties in the isolated western outposts.  They recovered thousands of head of stolen livestock and spent months on the trail of horse thieves and Indian raiders.

Although thirteen enlisted men and four regiments earned the Medal of Honor by the end of the Indian wars in the 1890s, and many went on to serve in the Spanish-American War, the Philippine Insurrection, and Pershing’s punitive expedition into Mexico against Pancho Villa, by the turn of the last century the Buffalo Soldiers faced increasing racial prejudice.  Resentment and anger that developed during

Reconstruction in the South drove a wedge between citizens and anyone in a Federal uniform, especially a black man transformed from slave to person of authority.  Buffalo Soldiers were stationed outside segregated communities and were subjected to increasing harassment by local police, beatings, and occasional sniper attacks.  One example of the increasing tensions between white citizens occurred in Brownsville in 1906 when the newly arrived Twenty-fifth regiment was falsely accused of a murder.  When members of the unit could not name the culprits, President Theodore Roosevelt followed recommendations to dishonorably discharge 167 men because of their “conspiracy of silence.”  It was 1972 before an inquiry found them innocent, and President Nixon granted the two surviving soldiers honorable discharges, without backpay.  When Congress finally passed a tax-free pension the following year, only one Buffalo Soldier survived, and he received $25,000 and was honored in ceremonies in Washington, DC and Los Angeles.

Buffalo Soldier regiments were not called to duty during WWI, however many of the experienced personnel served in other black units.  After the Ninth and Tenth cavalries were disbanded, their men served in other units during WWII.  The Twenty-fifth saw combat in the Pacific before being deactivated in 1949.  The Twenty-fourth, the last Buffalo Soldier regiment to see combat, served in the Pacific during WWII and in the opening days of the Korean War, before being deactivated in 1951.

In 1948 President Truman issued an executive order abolishing racial discrimination in the United States Armed Forces, but it was fifteen years later before Secretary of Defense Robert McNamara issued a directive obligating military commanders to stop discrimination based on sex or race in facilities used by soldiers or their family.

The Buffalo Soldiers National Museum was founded in 2000 as “the only museum dedicated primarily to preserving the legacy and honor of the African-American soldier.”  It is located in Houston and will honor military heroes at the 14th Annual Gala on February 28, 2014.

6 thoughts on “Buffalo Soldiers in Texas”

This site uses Akismet to reduce spam. Learn how your comment data is processed.

These tales are told with a Texas twang. I include stories of real people that I discovered while writing books about famous and infamous Texas sites and writing Historical Markers posted along Texas roadways. Yes, real people write the words you see on those highway markers.

Visitors to this Site